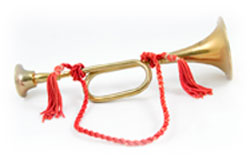 We live close to Camp Pendleton Marine Base and wondered if it came from there. We noticed through our window that our neighbor across the street was in his front yard at this time, so we asked if he heard the trumpet call. He didnt, so we concluded that the calls didnt come from Camp Pendleton. Had they done so, it wouldnt have been in mid-morning!  Half joking and half serious, I said to Joy, This isnt Gods trumpet call announcing the return of Jesus, is it? We waited  but nothing more happened.

As Gods Word promised, in his writing about Christs return the Apostle Paul stated, Behold, I show you a mystery; We shall not all sleep, but we shall all be changed, in a moment, in the twinkling of an eye, at the last trump: for the trumpet shall sound, and the dead [believers in Jesus] shall be raised incorruptible, and we shall be changed.1

Furthermore, Jesus Himself promised his followers: Let not your heart be troubled; you believe in God, believe also in Me. In My Fathers house [Heaven] are many mansions; if it were not so, I would have told you. I go to prepare a place for you. And if I go and prepare a place for you, I will come again and receive you to Myself; that where I am, there you may be also.2 See also What Gods Word has to say about Christians who have already died at the time of Gods trumpet call.3

Of this we can be absolutely certainlike the trumpet call Joy and I heardwhen it is least expected, Gods trumpet call will sound. If it were today, would you hear it? Would you be ready to get up and go with Jesus? We will either go with Jesus, or we will be left behindthe latter of which is an extremely sobering thought.

All articles on this website are written by
Richard (Dick) Innes unless otherwise stated.